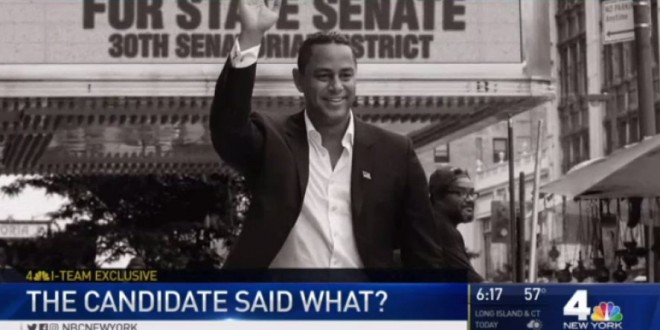 A candidate for New York State Senate has sparked a firestorm in Harlem after telling NBC 4 New York’s I-Team he was planning to hand out “Kool Aid, KFC and watermelons” at a campaign event in the primarily black community.

Jon Girodes, the Republican candidate for New York’s 30th District in the November election, used the racially stereotypical food reference in an email to the I-Team during an exchange about a disputed real estate deal.

“Ps I’m hosting an event in Harlem which will be in front of the state building in a few weeks. We will [donate] Kool Aid, KFC and watermelons to the public on 125th street in Harlem. Please join us to help the community,” he wrote.

Girodes, who is making his second run for the 30th District senate seat and headlined his campaign website with an image of Dr. Martin Luther King Jr., said there was nothing offensive about his planned event.

“What I think is anyone who gives free food to people is doing them a favor,” Girodes told the I-Team. “Get a bunch of people who say it’s offensive and let me go into their neighborhood and give it out for free and see if they take it.”

He then went on to accuse WNBC investigative reporter Sarah Wallace of stalking him, describing her text message requests for comment as a “desperate” attempt to lure him romantically—comments he described as jokes.

“I did not write those words, and if Sarah Wallace is interested in dating me you can tell her I’m in love with my girlfriend,” Girodes told Gothamist on Wednesday.

Girodes also confirmed that he responded to one text from Wallace with a shirtless picture of himself—a photo message that features in WNBC’s coverage. “That is something I sent to Sarah Wallace because I got so angry at this lady,” he said. “She keeps texting me and texting me. I thought she had a crush. I’m a very funny guy. That’s my sarcasm.”