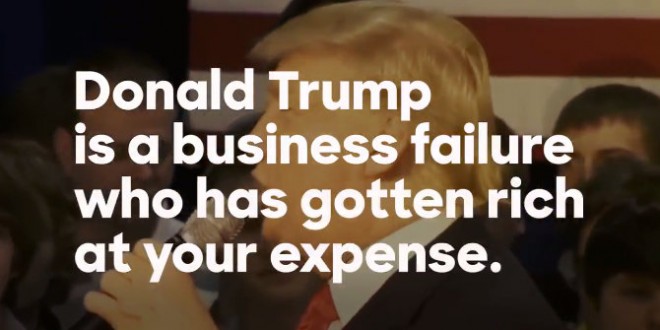 A new video released by Hillary Clinton’s campaign alleges that “Donald Trump is a business failure who has gotten rich at your expense.” “That’s what three pages of his tax returns show,” the video wraps by saying. “Imagine what he’s hiding in the rest.”

The video, posted Monday morning to Clinton’s Twitter account, follows the bombshell report from the New York Times, which published three pages of Trump’s 1995 tax returns Saturday night. Those pages showed Trump reported $916 million in losses that year, an amount that would have allowed him to avoid paying any federal income taxes for an 18-year stretch.

Can a man who lost $1 billion in one year, stiffed small businesses, and may have paid no taxes really claim he’s “good at business”? pic.twitter.com/ZeXgrkJhzj

Previous This Is An Ad For Something [VIDEO]
Next Alex Jones: The Next Debate Will Also Be Totally Rigged Because Anderson Cooper Works For The CIA