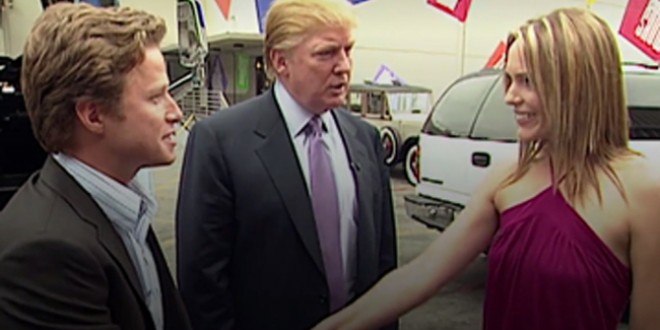 Billy Bush has been cut from NBC’s Today show for his role in Donald Trump’s lewd talk about women in a 2005 hot-mic tape. Settlement details were not immediately disclosed. The end came Monday afternoon after the network spent over a week negotiating the terms of departure with Bush and his crisis lawyer, which followed internal discussion about whether to punish him and how.

Hours prior, a CNN interview with Melania Trump was released in which she said Bush “egged on” Trump in the tape. She said Bush and Trump were engaged in “boy talk” and that Trump was “led on, like egged on, from the host to say dirty and bad stuff.”

A note went out to NBC staff from executive producer Noah Oppenheim on Monday, announcing that “Billy Bush will be leaving the TODAY show’s 9am hour, effective today. While he was a new member of the TODAY team, he was a valued colleague and longtime member of the broader NBC family. We wish him success as he goes forward.”

Previous #NeverTrump: Watch This Hilarious TrumpTV Ad
Next LOUISIANA: Court Rules That AG Can Block State Contracts Because They Include LGBT Protections