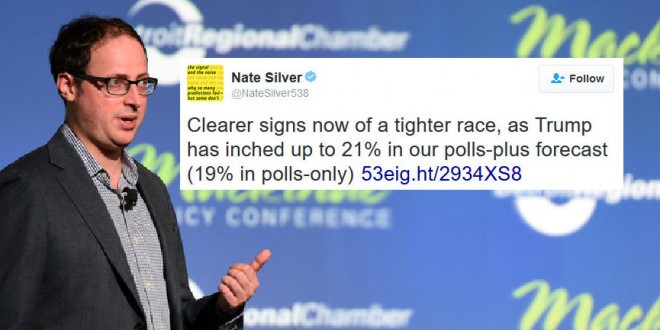 Nate Silver: There Are Clearer Signs Of A Tighter Race

This morning Nate Silver noted that there are “clearer signs” that the presidential race is tightening. Here’s what he wrote yesterday before today’s slight change to his predictive map:

But what do the polls say? The race probably is tightening — but perhaps not as much as the hype on the cable networks would imply. In our polls-only forecast, Trump has narrowed Clinton’s lead in the popular vote to roughly 6 percentage points from 7 points a week ago, and his chances of winning have ticked up to 17 percent from 13 percent. In our polls-plus forecast, Trump’s chances are up to 19 percent from 16 percent.

Because of the high level of uncertainty in the race, we can’t say the door is closed on a narrow Trump victory. And we’re certainly a week or two removed from the period when every poll brought good news for Clinton: Plenty of polls now show negative trend lines for her (in addition to others that show a positive trend). But the race hasn’t fundamentally changed all that much, and Clinton remains in a strong position. Previous Pence Contradicts Trump On Likelihood Of Voter Fraud
Next GDP Hits 2.9% In Biggest Gain Since 2014