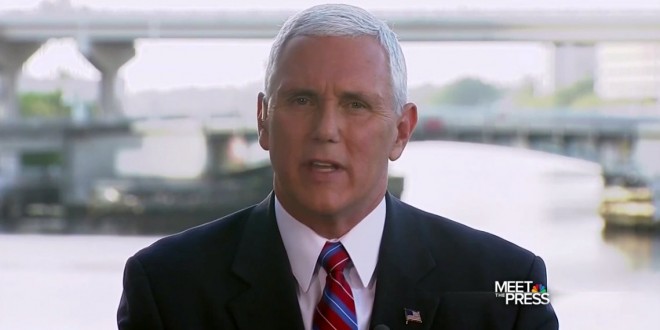 Mike Pence: We Will Absolutely Accept The Result Of The Election Which Is Being Totally Rigged [VIDEO]

Republican vice presidential candidate Mike Pence said Sunday the Trump campaign would “absolutely accept” the results of the Nov. 8 presidential election. “We will absolutely accept the result of the election,” Pence said during an interview on NBC’s “Meet the Press,” later adding that the GOP ticket will “accept the will of the American people.”

GOP presidential nominee Donald Trump, who is trailing in the polls against Democrat Hillary Clinton, has warned supporters that the election could be rigged against him and has called on them to monitor polling places for potential voter fraud.

But when pushed by host Chuck Todd on whether he believes the election could be subject to widespread voter fraud or if talking about a rigged election could “undermine our democracy,” Pence instead lambasted media coverage of the campaign, which he said was tilted in favor of Clinton.

Previous Trump: Unfunny SNL Is Doing A Hit Job On Me [VIDEO]
Next Hillary +11 Nationwide In New NBC/WSJ Poll