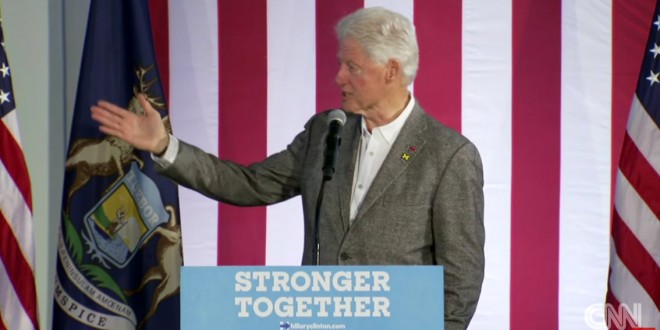 Speaking Monday at a Democratic rally in Flint, Michigan, the former president ripped into the Affordable Care Act (ACA) for flooding the health care insurance market and causing premiums to rise for middle-class Americans who do not qualify for subsidies.

“So you’ve got this crazy system where all of a sudden 25 million more people have health care and then the people who are out there busting it, sometimes 60 hours a week, wind up with their premiums doubled and their coverage cut in half. It’s the craziest thing in the world,” Clinton said.

Clinton, whose efforts with his wife to overhaul health care in the 1990s were stymied by a recalcitrant Congress and the insurance lobby, told the crowd the insurance model “doesn’t make sense” and “doesn’t work here.”

Previous NORTH CAROLINA: Hillary +5, Cooper +4 In New Poll
Next Gary Johnson: Leaders Who Know Geography Are Dangerous Because They Know Where To Start Wars