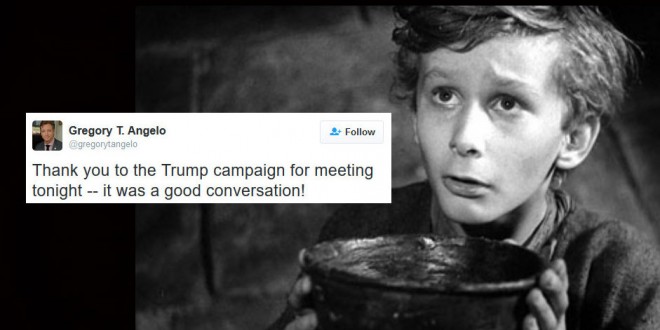 The Log Cabin Republicans (LCR), the gay GOP group that for almost a year had claimed Donald Trump was the most “pro-LGBT” Republican presidential candidate ever, has now decided that Trump is in fact a danger to the rights of queer people — so much so that the group can’t endorse him. This decision, and its timing, exposes how completely soulless and deceptive the group is, lacking backbone while engaging in rank hypocrisy.

The non-endorsement is stunning since the group endorsed both Mitt Romney in 2012 and John McCain in 2008, both of whom its spokespeople had described as more opposed to LGBT rights than Trump. And those endorsements came (as all LCR decisions on presidential endorsements) on the weekend of the Republican National Convention (RNC), meant to help get attention and help elect the candidates heading into the general election campaign.

But by telegraphing that LCR was likely backing Trump, saying over and over for more than a year that he was so “pro-LGBT” — including in an interview with me at the RNC — only to decline to officially endorse him two weeks before the election, Log Cabin’s leader, Gregory T. Angelo, still helped Trump throughout the election. The non-endorsement at this point in time has minimal negative impact on the sinking Trump.

Thank you to the Trump campaign for meeting tonight — it was a good conversation!

Begging for extra bread and water in the gulag. https://t.co/AeLV5enW2o