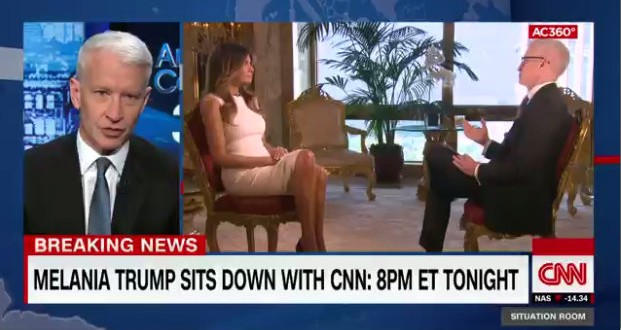 Melania Trump says her husband was “egged on” in the 2005 tape in which he made lewd comments about his own sexually aggressive behavior toward women — remarks she says were “boy talk.”

“I said to my husband that, you know, the language was inappropriate. It’s not acceptable. And I was surprised, because that is not the man that I know,” the wife of the Republican presidential nominee said in an exclusive interview with CNN’s Anderson Cooper, which is set to air at 8 p.m. ET Monday.

“And as you can see from the tape, the cameras were not on — it was only a mic. And I wonder if they even knew that the mic was on,” she said, referring to Trump and NBC’s “Access Hollywood” host Billy Bush. She said they were engaged in “boy talk, and he was led on — like, egged on — from the host to say dirty and bad stuff.”

Melania Trump says her husband was egged on by Billy Bush when he made sexually aggressive remarks in a 2005 tape https://t.co/MtUrvlX6kx

Previous Wikileaks: It Was Ecuador That Cut Assange’s Internet
Next Evangelicals Launch 21 Days Of Fasting And Prayer That God Gets All Christians Into The Voting Booth