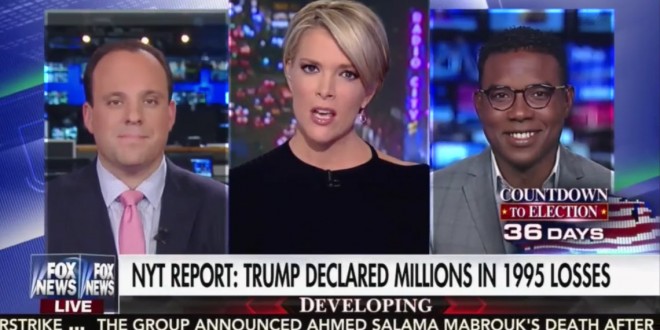 Megyn Kelly acknowledges that if Donald Trump hasn’t paid federal income taxes for 18 years, it’s perfectly legal. That doesn’t mean she’s happy about it. She spoke tonight on The Kelly File about how Trump “screwed” the little guys and gave some of his supporters a chance to respond. A frustrated Kelly said it’s hard to talk about Trump’s taxes without knowing how much he paid but we won’t know how much he paid “because he won’t release his taxes!” Boris Epshteyn was on hand to defend the candidate, so Kelly turned to asking him why Trump has a history of attacking those who don’t pay taxes but then paying the bare minimum himself. He deflected, but you need to see how she handled it for yourself.