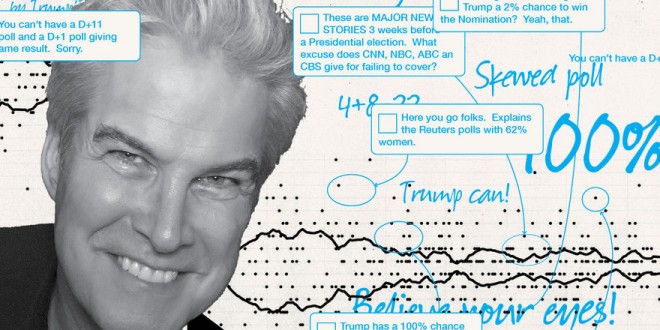 Buzzfeed has published a look at Bill Mitchell, Twitter’s widely-followed and insanely prolific Trump fan who has never met a conspiracy claim that he didn’t love. The article is both long and enormously entertaining, so it’s hard to select an excerpt. Here’s one:

Glancing at his Twitter bio page, you’d think Bill Mitchell has been around the conservative talk pundit scene for ages. His face is long, with a head of well-styled silver hair and an intense jawline and bushy eyebrows that arch at a cartoonish pitch. Alongside his headshot, his bio boasts that his show, YourVoice™ Radio, is “a number one political talk show.” No matter that the show is hosted on a DIY podcasting platform and has only a few thousand listeners per episode. “Everyone seemed to assume he was some sort of somebody — like, a longtime local radio guy or whatever,” one reporter told me when I asked if he knew where Mitchell came from.

In truth, Mitchell’s only qualification seems to be that he just started tweeting a lot. “I’ve always been clever with words,” he said. “As a recruiter, I make my living as a communicator. I’m good with word images and painting pictures with a short phrase here and there that people can relate to.” When asked how much time he spends crafting his tweets, he dismissed the idea that there’s too much forethought. “I’m just firing the thoughts out as I come to them. I have an interesting take, you see. I delve into the internals and really tell people what’s going on and it’s given me some fame.”

Mitchell’s appeal makes sense — he’s one of them. Like his audience, he’s quick to indulge a good conspiracy theory and subscribes to a media diet free of “mainstream bias,” reading Breitbart, Conservative Treehouse, DC Whispers, the Gateway Pundit, and the occasional Drudge article. He doesn’t check mainstream sites and networks like CNN or MSNBC because “it’s all spin to me.” For a growing number of Americans who’ve defined themselves online by adding “Deplorable” to their Twitter handle, @mitchellvii is a beacon in a growing storm of bad news — a kind of post-truth, post-math Nate Silver. For everyone else, the account is an almost anthropological look at Trumpism at its most simple-minded.

Hit the link for the rest. It’s worth your time.

Trump has a 100% chance of winning in November.

Careful folks, a lot of Hillbots are putting "Deplorable" in their names to fool you.

You notice that not a single person in the media is asking, "Where's Hillary?" despite her being MIA for a week now?

RELATED: Yesterday JMG reader Jon tipped me to Mitchell’s unintentionally hilarious Yahoo Answers page, about which I can’t even. Sample question: “Why don’t they make a condom just for the head of the penis?”

Previous Conway: We Invited Obama’s Kenyan Half-Brother To The Debate Because We Support Inclusiveness [VIDEO]
Next MIAMI-DADE: Hillary +30 In Florida’s Biggest County