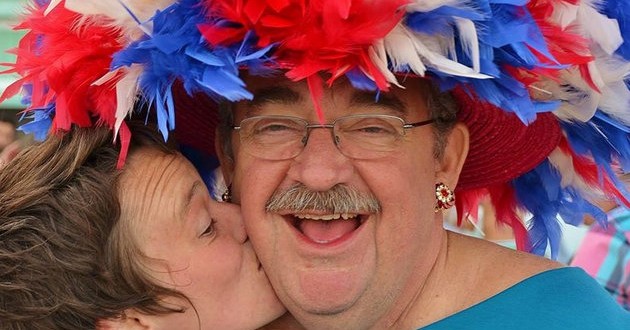 On Sunday, October 16th the Arlington Street Church in Back Bay was filled to capacity as family, friends and members of the Boston LGBTQ community came together for a service in celebration of the life of John Michael Gray (one half of the Hat Sisters). Mayor Marty Walsh addressed those gathered and a surprisingly personal and touching letter from Gov. Charlie Baker that was sent to Tim O’Connor, in the days following Gray’s death was read. Friends and former colleagues shared personal (and funny) stories about Gray. The emotionally charged celebration paid a fitting tribute to this local icon, who gave so much of himself to the LGBTQ communities of Provincetown and Boston.

More from the Advocate:

A 2011 article in One New England detailed the Hat Sisters’ origin: “The Hat Sisters happened quite by accident. John Michael Gray was in Provincetown preparing for the second Provincetown Carnival in 1984. While talking with his significant other, Tim O’Connor, who was back home working in Boston, he spoke of all the costumes and parties he’d seen, and asked Tim what they should wear. Tim’s busy schedule prompted him to leave that up to his hubby. ‘I’ll wear whatever you wear,’ he said. With that, John Michael began to create, making two of everything, identical and colorful.”

As the Hat Sisters’ fame spread, they would appear at numerous gay events and charity fundraisers, benefiting the fights against AIDS, muscular dystrophy, homelessness, and more. They would sometimes have three events a day on their schedules, and they often donated their hats to charity auctions. And every June they would flip the switch to light the Pride Tree in Boston’s South End, the Boston edition of Edge reports.

I first learned of the Hat Sisters back in the 80s from their regular appearances in the comic strip The Mostly Unfabulous Social Life Of Ethan Green and was completely starstruck when I finally met them in person at Provincetown’s Boatslip in 1994. Since then, no trip to P-Town was ever complete until the Hat Sisters appeared, always to loud acclaim from everyone in the room.