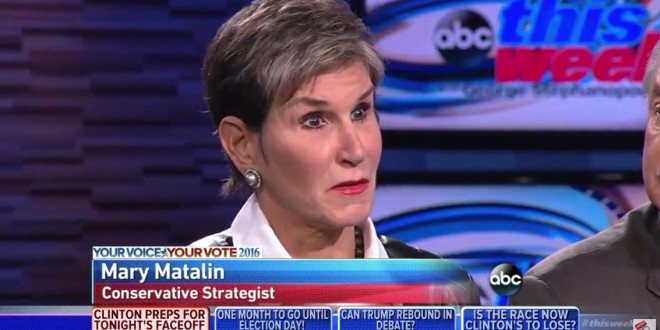 Video below. Via Mediaite:

During a back and forth that included host George Stephanopoulos, fellow GOP consultant Alex Castellanos, Democrat Stephanie Cutter and ABC’s Matthew Dowd, Matalin went off on a tangent regarding what voters really want to talk about.

“Three out of four voters said they will cast their vote based on health care,” Matalin stated. “What’s going on out there? We’re all talking about Venezuelan tarts.” The last portion was, of course, a reference to Alicia Machado, the former Miss Universe from Venezuela who was embroiled in a week-long feud with Trump after she was brought up in the first presidential debate.

Previous Debate To Open With #Pussygate Questions
Next YOUR FACE, IT WAS APRICOT: Carly Simon Repurposes You’re So Vain For Dem Super PAC Ad [VIDEO]