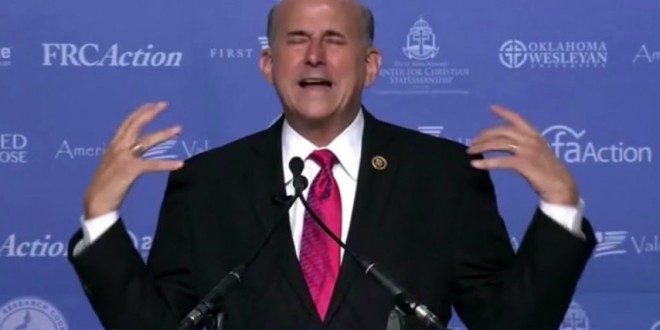 Loony Tune Louie Gohmert: God Drowned Everybody In The World Because Of Same-Sex Marriage [AUDIO]

Rep. Louie Gohmert, R-Texas, who has previously registered his concern about the prospect of gay space colonies, connected homosexuality to Noah’s Flood on a radio program yesterday.

Gohmert, who was guest hosting the “Point of View” radio show, interviewed conservative activist and “Reaganbook” founder Janet Porter about her anti-LGBT film “Light Wins,” which featured appearances from Gohmert and other prominent Republicans such as Rand Paul and Mike Huckabee.

The congressman quoted a portion of the movie in which Porter, who believes that same-sex marriage caused Noah’s Flood, alleges that the only time in history besides today “where homosexual unions were authorized as marriage was in the ‘Days of Noah.’”

“We know homosexuality was widespread in Greece and Rome and Babylon and especially in Sodom and Gomorrah but that’s a little scary that it wasn’t legal except before the flood,” Gohmert commented.

Previous Ben Carson On #Pussygate: All Men Talk Like That And If You Don’t Know It, That’s Your Problem [VIDEO]
Next Alt-Right Leader Vows To “Spoil” Down-Ballot GOP Races If They Don’t Stop “Sabotaging” Donald Trump