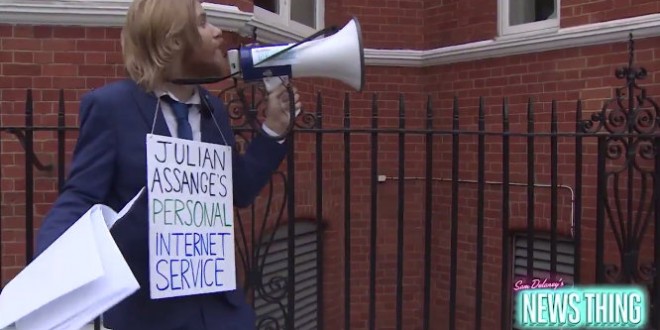 After the Ecuador Embassy in London cut off Julian Assange‘s access to the Internet, one man took it upon himself to keep the Wikileaks founder up to speed. Comedian Bobby Mair showed up outside the embassy Wednesday armed with a bullhorn and adorned with a sign announcing himself as “Julian Assange’s Personal Internet Service.”

“What I’ve done is printed out the highlights of the Internet and I’m gonna read them to Mr. Assange with this megaphone,” Mair explained. Said “highlights” included Assange’s horoscope and the weather report in his hometown. He also serenaded him with “In the Air Tonight” for reasons that were not apparent.

Reading the news in Russian would have been funnier.

This is what happened when @BobbyMair went to read the internet to @wikileaks Julian Assange. pic.twitter.com/SVtR7vxhaJ