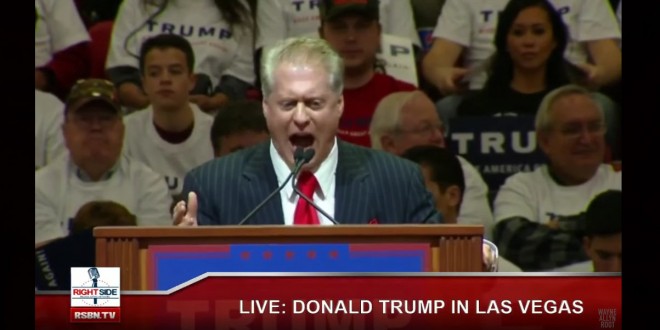 A speaker warming up the crowd for Donald Trump at a campaign rally Sunday morning fantasized about the deaths of Hillary Clinton and a senior aide. Conservative commentator Wayne Allyn Root, describing his fantasy of a made-for-TV movie about Clinton and aide Huma Abedin, said, “We all get our wish. The ending is like ‘Thelma and Louise.”

In the 1991 film, the title characters drive over a cliff to their death. Root’s line drew cheers from rally attendees. Root’s call is the latest elevation in the increasingly extreme and violent rhetoric directed by Trump and his surrogates at Clinton at campaign events.

On Sunday, Root’s fantasy about Clinton and Abedin was a pastiche of pop culture references. “It’s Hillary in a White Ford Bronco,” he said. “She’s got Huma driving, and they’re headed for the Mexican border. I have a name for the future TV movie. It’s called, ‘Driving Ms. Hillary.’” He added, “When they make the run for the border of Mexico, there’s nowhere to go, because President Trump has built a big, beautiful wall.”

Encouraging Trump’s supporters to fight to the end, Root said, “This is why we were born. This is a 10-day run.” Root said their mantra has to be, “attack, attack, attack. We will never accept defeat. We will never give up.” He added, “I will give you my country when you pry it from my cold, dead hands.” Before Sunday’s rally, Trump attended a church service.

Last week Root declared that Trump is “far too handsome” to ever need to grope women. In August he called for banning people on public assistance and women on birth control from voting.