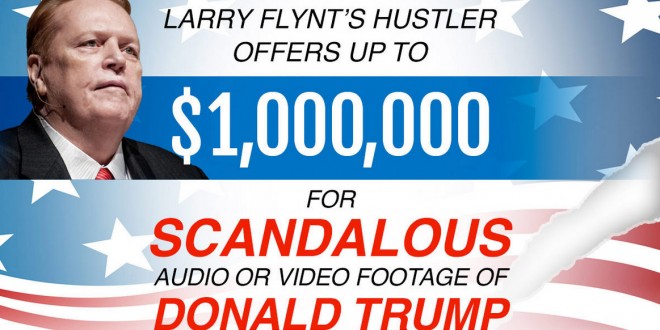 Pornographer Larry Flynt announced Monday that he would pay up to $1 million for video or audio recordings of GOP presidential nominee Donald Trump engaged in illegal behavior or acting in a sexually demeaning manner toward women.

“I have always celebrated women. Women in all shapes and sizes,” the publisher of Hustler magazine said in a statement. “To treat a woman like Mr. Trump himself has is both disappointing and unbelievable, especially coming from someone who wants to be our president.” Flynt has also come under fire for exploiting and degrading women through his magazine and online site, which carry explicit pictures of naked women.

Flynt, a Democrat, has a history of offering to pay for evidence of politicians’ misdeeds. During the impeachment trial of President Bill Clinton, Flynt made such an offer and received information about extramarital affairs from Rep. Bob Livingston. The Louisiana Republican, then slated to be the next House Speaker, responded by resigning from Congress.