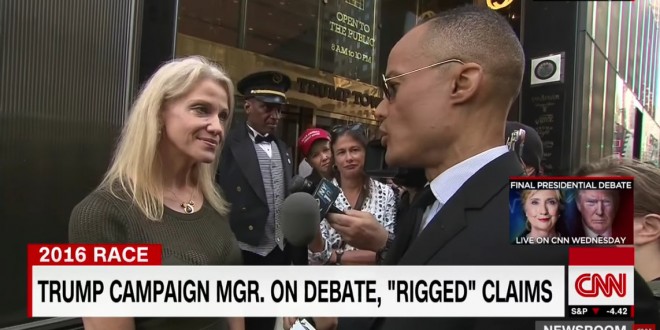 Kellyanne Conway: Trump Is Only Complaining About Biased Media, Not The Electoral Process [VIDEO]

At the exact moment this morning that Donald Trump was tweeting about voter fraud, Kellyanne Conway was reassuring CNN that he only means that the media is biased against him. Mediaite reports:

“Anybody who reads the newspaper online or in print or has a remote control probably has recognized that in many ways, the fix is in for Mrs. Clinton when it comes to the mainstream media,” Conway told CNN’s Jason Carroll outside Trump Tower.

After stating that the country has been done a disservice by the media in regards to getting a chance to hear the issues when it comes to Trump, Carroll pressed her on Trump’s own rhetoric about widespread voter fraud. Conway demurred when discussing that, saying the campaign would only look into actual cases when they occurred, but wasn’t claiming it was an actual issue.

After the short interview ended, CNN posted a tweet from Trump that completely contradicted what Conway had just said. Trump is scheduled to be in Green Bay, Wisconsin later today for a rally.