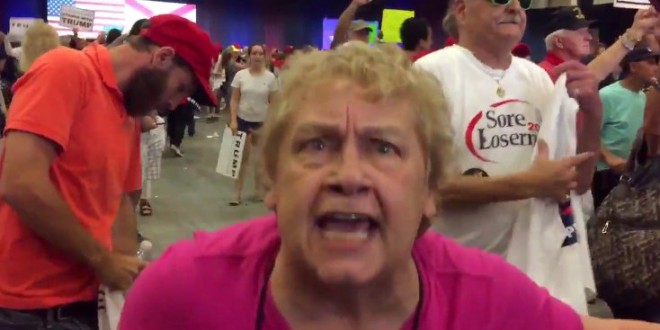 From the Committee To Protect Journalism:

In an unprecedented step, the Committee to Protect Journalists today released a statement recognizing that a Donald Trump presidency would represent a threat to press freedom. In response to Trump’s threats and vilification of the media during his campaign, the chairman of CPJ’s board, Sandra Mims Rowe, issued the following statement on behalf of the organization:

Guaranteeing the free flow of information to citizens through a robust, independent press is essential to American democracy. For more than 200 years this founding principle has protected journalists in the United States and inspired those around the world, including brave journalists facing violence, censorship, and government repression.

Donald Trump, through his words and actions as a candidate for president of the United States, has consistently betrayed First Amendment values. On October 6, CPJ’s board of directors passed a resolution declaring Trump an unprecedented threat to the rights of journalists and to CPJ’s ability to advocate for press freedom around the world.

Since the beginning of his candidacy, Trump has insulted and vilified the press and has made his opposition to the media a centerpiece of his campaign. Trump has routinely labeled the press as “dishonest” and “scum” and singled out individual news organizations and journalists.

He has mocked a disabled New York Times journalist and called an ABC News reporter a “sleaze” in a press conference. He expelled Univision anchor Jorge Ramos from a campaign press conference because he asked an “impertinent” question, and has publicly demeaned other journalists.

Trump has refused to condemn attacks on journalists by his supporters. His campaign has also systematically denied press credentials to outlets that have covered him critically, including The Washington Post, BuzzFeed, Politico, The Huffington Post, The Daily Beast, Univision, and The Des Moines Register.

Throughout his campaign, Trump has routinely made vague proposals to limit basic elements of press and internet freedom. At a rally in February, Trump declared that if elected president he would “open up our libel laws so when they write purposely negative and horrible and false articles, we can sue them and win lots of money.” In September, Trump tweeted, “My lawyers want to sue the failing @nytimes so badly for irresponsible intent. I said no (for now), but they are watching. Really disgusting.”

While some have suggested that these statements are rhetorical, we take Trump at his word. His intent and his disregard for the constitutional free press principle are clear.

A Trump presidency would represent a threat to press freedom in the United States, but the consequences for the rights of journalists around the world could be far more serious. Any failure of the United States to uphold its own standards emboldens dictators and despots to restrict the media in their own countries. This appears to be of no concern to Trump, who indicated that he has no inclination to challenge governments on press freedom and the treatment of journalists.

When MSNBC’s Joe Scarborough asked him in December if his admiration of Russian President Vladimir Putin was at all tempered by the country’s history of critical journalists being murdered, his response was: “He’s running his country, and at least he’s a leader, unlike what we have in this country… Well, I think that our country does plenty of killing, too.”

Through his words and actions, Trump has consistently demonstrated a contempt for the role of the press beyond offering publicity to him and advancing his interests.

For this reason CPJ is taking the unprecedented step of speaking out now. This is not about picking sides in an election. This is recognizing that a Trump presidency represents a threat to press freedom unknown in modern history.

Woman screams at press after Trump rally: “we’re mad at you!” pic.twitter.com/r5ewYTpfwB

“It is, at times, getting downright scary.” @JimAcosta holding up the sign with a swastika + the word “media” that was left at Trump’s rally pic.twitter.com/qFCLGPAQ3x — Brian Stelter (@brianstelter) October 13, 2016