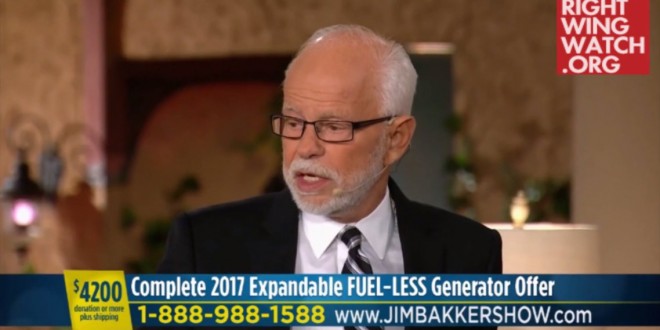 Jim Bakker: A Prophet Told Me Two Nukes Will Soon Go Off In America (So Buy His Food Buckets) [VIDEO]

One of Bakker’s guests, End Times author John Shorey, said that President Obama wants to become “the head of the world,” while nefarious elites are manufacturing international crises in order to drive up support for globalism. Such moves, he said, will fulfill biblical prophecies about the creation of a one-world government and the appearance of the Antichrist.

Later, Bakker revealed that “a known prophet” told him “that two atomic bombs shortly will hit the United States of America.” “I’m not saying that’s true,” he said. “I’m just saying—I’m just picking up a lot of garble on the internet, on the networks, just hearing the word—prophetic chatter.”