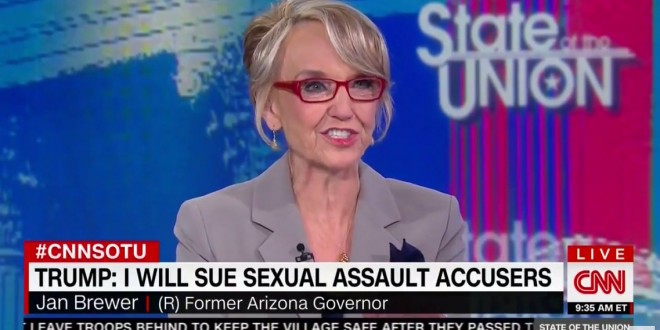 Jan Brewer: Donald Trump Has Been “Waterboarded” By All These Accusations Of Sexual Assault [VIDEO]

Via the Daily Beast:

Former Arizona Gov. and Donald Trump supporter Jan Brewer defended the Republican nominee for threatening to sue the women accusing him of sexual assault. And she did so with some unfortunate imagery. “He’s been waterboarded by these issues,” Brewer said on CNN’s State of the Union, prompting uncomfortable laughter from her fellow panelists. “It seems like it’s been somewhat of a put-up impression on Donald Trump from all these people lining up. It’s just unbelievable. And anybody that’s been under those kinds of assaults, I think would want to defend themselves.”