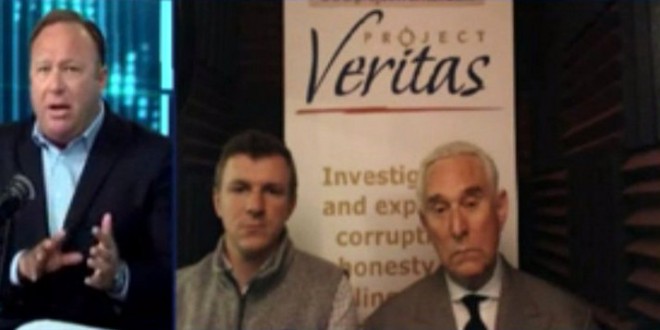 James O’Keefe Tells Nutjob Alex Jones: There Will Be A Literal Revolution If The Election Is Stolen [VIDEO]

O’Keefe showed up today on Alex Jones’ InfoWars, along with Trump ally Roger Stone. Speaking about the possibility of a rigged election that could cost Trump a victory next month, O’Keefe told Jones that a stolen election would mean a revolution would occur. “If you have 50 to 100 million people in this country who have no one to speak for them what’s going to happen to those people,” O’Keefe stated. “I think that’s a powerful movement of people that are going to literally revolt.”

He noted that it wouldn’t be with “pitchforks” but instead via social media. He then reiterated that people would “literally going to revolt.” Stone jumped in next, warning Jones and O’Keefe that “you need hard evidence that would be admissible in court.” He said voter fraud wasn’t the big issue, but instead, the whole system, and that’s why he has an organization in place that will compare exit polls to the actual results.

Previous CNBC Host Shouts “Brexit! Brexit!” When Evan McMullin Points Out That Trump Is Losing In The Polls [VIDEO]
Next Trump: Cancel The Election And Give It To Me [VIDEO]