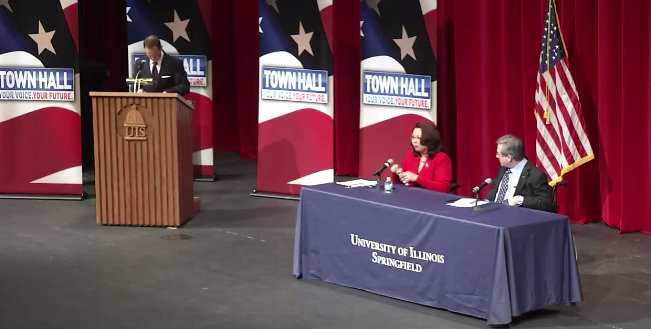 Illinois Sen. Mark Kirk is again under fire for making racially-charged comments, this time for questioning the military service of his Democratic opponent’s family.

During Thursday night’s debate between Kirk and challenger Rep. Tammy Duckworth, Duckworth spoke about her desire to be in the Senate as a voice of reason and referenced her family’s history of service, saying, “My family has served this nation in uniform, going back to the Revolution. I’m a daughter of the American Revolution. I’ve bled for this nation. But I still want to be there in the Senate when the drums of war sound. Because people are quick to sound the drums of war, and I want to be there to say this is what it costs, this is what you’re asking us to do. … Families like mine are the ones that bleed first.”

Kirk responded: “I had forgotten that your parents came all the way from Thailand to serve George Washington.”

Though Duckworth, who was born in Thailand to a Thai mother of Chinese descent and an American father, did not respond on the stage, she tweeted a photo after the debate of herself with her parents — her father displaying medals of service on his coat. Duckworth’s late father, Franklin, served in World War II and has “traced his lineage back to an ancestor who fought in the American Revolution,” according to a 2012 Mother Jones profile on Duckworth’s run for Congress.

Duckworth is leading Kirk by seven points in the RealClearPolitics polling average. Kirk has been endorsed by the Human Rights Campaign.

My mom is an immigrant and my dad and his family have served this nation in uniform since the Revolution #ILSEN pic.twitter.com/ehEBHswFMs— Tammy Duckworth (@TammyforIL) October 28, 2016