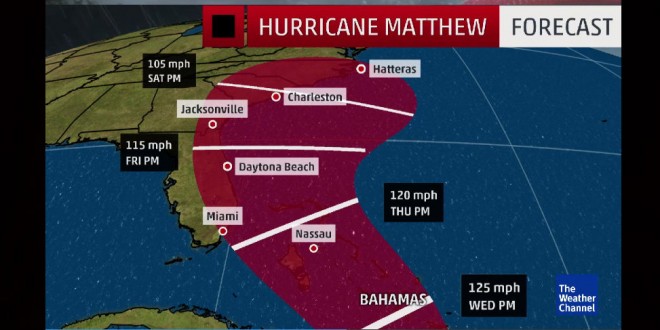 While its potential impact on the U.S. remained unclear, NBC News meteorologist Bill Karins suggested that that Hurricane Matthew’s path could be reminiscent of Hurricane Floyd in 1999 — which required the evacuation of 2.6 million people across five states. As of Tuesday morning, Karins expected the storm could be a “major hurricane” from Florida all the way to North Carolina, though he noted the projected impact might fluctuate.

Both Florida Gov. Rick Scott and North Carolina Gov. Pat McCrory activated states of emergency on Monday, covering 66 counties in North Carolina and all counties in Florida. “Right now, the projected path is a little off the coast, but it can change at a moment’s notice,” Scott said at a news conference Monday. “When that happens, we’re not going to have a lot of time to get ready.”

Karins warned that Tuesday was a “very important preparation day for all of the southeast coast” of the U.S. He added: “The possibility exists for mandatory evacuations starting as early as late this evening in South Florida and definitely Wednesday for southern half of Florida on the east coast. With an expected path right along the Florida’s east coast Matthew could be the biggest mass evacuation of coastal Florida since Floyd in 1999. And just like Floyd, it is not guaranteed that Matthew’s eye will make landfall in Florida but it will be a close call.”

Karins predicted that Matthew would remain a Category 3 or 4 hurricane by the time it neared Florida on Thursday and likely would be a Category 2 or 3 when it reaches Georgia and North Carolina on Friday. When hurricanes are particularly deadly or destructive, the names are retired. Meteorologists expect this to be the last hurricane named Matthew. “Certainly, the way this one is going, even if it doesn’t hit the U.S. directly. I would say this is the last Matthew,” Roth said.