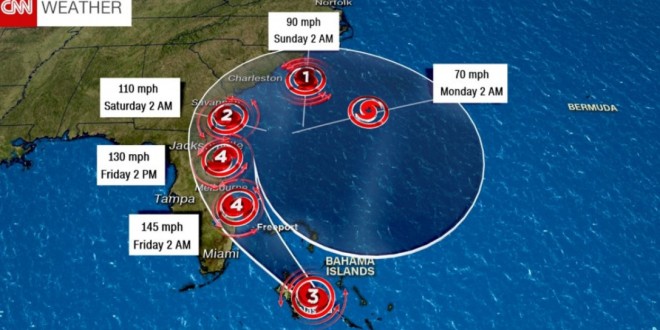 Residents and tourists were streaming out of the coastal areas of southeast Florida and South Carolina Thursday as a strengthening Hurricane Matthew zeroes in for a late night landing on the U.S. mainland after hammering the Bahamas. Packing maximum sustained winds of 125 mph, the storm was around 60 miles southeast of Nassau and around 255 miles southeast of West Palm Beach at 5 a.m. ET, according to the National Hurricane Center.

The governors of Florida, South Carolina and North Carolina have declared states of emergency along the coast in anticipation of high-winds and life-threatening storm surges as high as 9 feet in some areas. Florida Gov. Rick Scott asked President Obama to declare a pre-landfall emergency, activate 1,000 more National Guard members to join the 1,500 already positioned in the state and suspend all tolls in the affected areas, including the entire Florida Turnpike, Alligator Alley, Central Florida Expressway Authority and the Miami-Dade Expressway Authority.