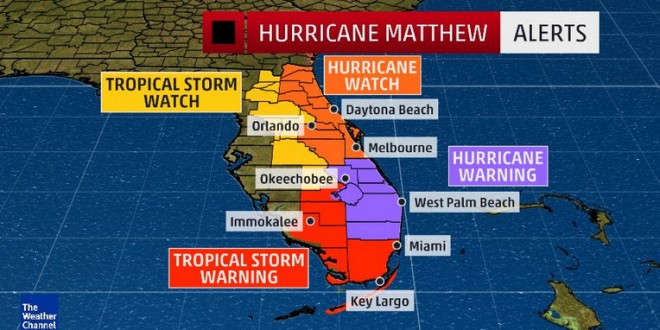 Strong winds, heavy rains and a dangerous storm surge were beginning to spread over the Bahamas Wednesday from Category 3 Hurricane Matthew, which is tracking north toward the east coast of Florida, according to the National Hurricane Center.

The possibility that South Florida could be struck by a storm of at least Category 3 strength represents the greatest hurricane threat to the region in many years. A Category 3 storm, which produces winds of 111-129 miles per hour, is capable of causing “devastating” damage, according to the hurricane center.

The hurricane center, which had previously thought the storm would weaken significantly as it passed over Cuba, now projects it to remain a major hurricane of Category 3 strength or higher, for its entire projected course. Florida Power & Light Co. announced it was activating its emergency response plan, preparing to deploy 4,000 workers to restore power.