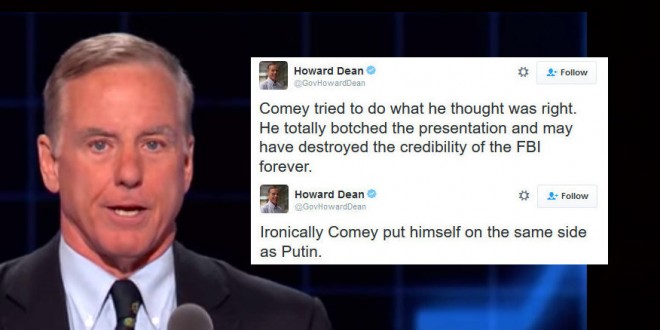 Howard Dean: Comey Has Put Himself On Putin’s Side

Yes, but Russia. That seems to be a common refrain amongst certain Democrats these days whenever anything about Hillary Clinton‘s emails is brought up. But now that FBI Director James Comey announced the discovery of emails possibly relevant to their Clinton investigation, Howard Dean sent out this shark-jumping tweet. That’s Howard Dean saying the head of the FBI put himself on the “same side” as the leader of Russia.

Previous IOWA: Trump Supporter Busted For Voter Fraud Says She Did It Because The Polls Are Totally Rigged
Next Bob Dylan Finally Acknowledges Nobel Prize