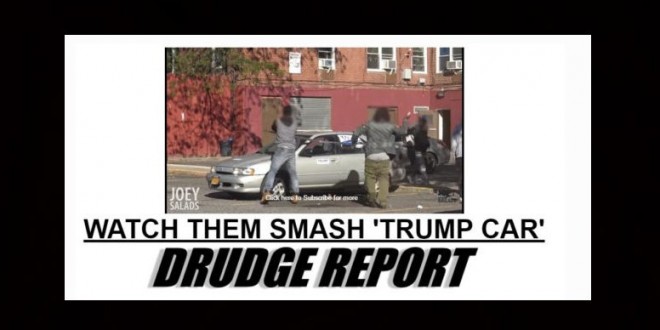 Earlier this week homocon bloggers Matt Drudge and Jim Hoft inflamed Teabagistan when they fell for a Twitter prankster who claimed to be a mailman who was destroying absentee ballots marked for Trump. Today we see that they have been punked yet again. Via Mediaite:

A video of young black men apparently vandalizing a car with Trump campaign stickers was widely reported on conservative media as real news — even though it was revealed to be a staged event.

“I just want to apologize to everyone for my last video being fake,” impresario of YouTube prankster Joey Salads said in his apology video posted online Wednesday. “There’s no excuse for it. I know it made the black community look bad.”

His original video appeared online Monday, but one day later Ethan Klein at h3h3Productions debunked Salads’ “social experiment” in a widely shared video, which prompted Salads to take it down. Thanks in large part to footage shot by Twitter user @txorres of Salads and the actors portraying the vandals hanging out together on the set, the video was revealed to be a staged set-up.

Before it was debunked and deleted, however, the tape was widely shared on conservative media outlets, including Drudge Report, Jim Hoft‘s Gateway Pundit, WND (since deleted), and Western Journalism. RealClearPolitics also fell for it.

Jim Hoft’s post remains on Gateway Pundit with no update even though many commenters have called out the fakery. Here’s what Hoft wrote:

YouTuber Joey Salads held a social experiment recently. He parked a car with Trump stickers in a “black neighborhood” to see what happens. It took 30 minutes before the Democrats started looting the car and beating out the windows. Bystanders chanted, “F*ck Trump!”

Previous Donald Trump Doubles Down At Ohio Rally: I Will Totally Accept The Results Of The Election IF I WIN [VIDEO]
Next McCain Rebukes Trump: Conceding An Election Isn’t Just An Act Of Graciousness, It’s The American Way