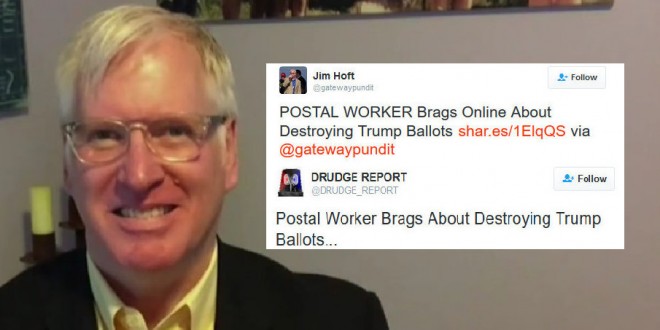 This morning homocon Gateway Pundit blogger Jim Hoft, widely known as the “Stupidest Man On The Internet,” got trolled by a prankster Twitter user who claimed to be an Ohio mailman who was destroying all absentee ballots marked for Trump. Hoft breathlessly reported the story to the great outrage of his readers, earning him a blaring headline from fellow homocon Matt Drudge. And then Rush Limbaugh piled on. Via the Daily Beast:

“Let me ask you this,” Limbaugh said. “If a postal worker went on social media—I don’t care what it was, Facebook Twitter, LinkedIn, Reddit, you name it—and was bragging about destroying Hillary absentee ballots, do you think they’d be trying to hunt this guy down and put him in jail with the guy who made the video about the started Benghazi. They wouldn’t be stopping. They’d find this guy, they’d hunt him down, they’d give him to Marilyn Mosby and say ‘Have at it.’”

Limbaugh then mulled over the complexity of RandyGDub’s nefarious activity. What would happen, Limbaugh wondered, if RandyGDub opened an absentee ballot marked for Clinton? “What happens when he opens one for Hillary?” Limbaugh queried. “He’s gotta reseal it, make it—I guess they don’t care, it doesn’t matter, as long as it says Hillary on it, the Democrats don’t care. Could be postmarked from Mars, they’ll take it.” Then Limbaugh sighed heavily.

After multiple sites called out the prank, Hoft posted this petulant update to his story: “The left says this is a joke. Because stealing elections is funny.”

i love working at the post office in Columbus, Ohio and ripping up absentee ballots that vote for trump

I hope you get fired! Cheating is the only way she’ll win. @realDonaldTrump Hey @JohnKasich is this okay with you? https://t.co/9mgk11KZHk — Scott Baio (@ScottBaio) October 17, 2016