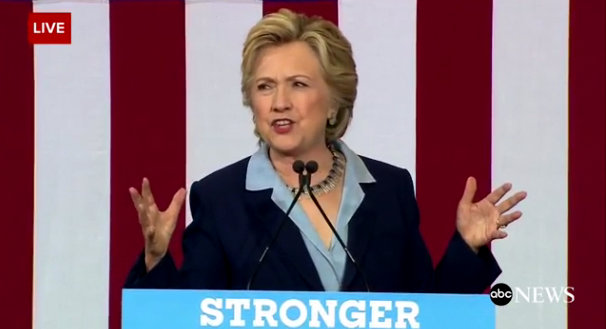 Hillary Clinton ripped Donald Trump over the report in The New York Times that he may have turned a nearly $1 billion loss into 18 years of not owing taxes, saying he was “taking from America with both hands, leaving the rest of us with the bill.”

The tax story was the centerpiece of Clinton’s argument on the economy, which came in the swing state of Ohio — which the Democratic presidential nominee had not visited since Labor Day. “While millions of American families, including mine and yours, were working hard, paying our fair share, it seems he was contributing nothing to our nation,” she said during the rally in Toledo.

And the former first lady attacked the Trump campaign’s defense of his lack of tax liability. Trump’s allies have claimed the deduction is standard practice. “What kind of genius loses a billion dollars in a single year?” Clinton responded with a laugh, after posing the Trump’ campaign’s defense.

“This is Trump to a T. He’s taken corporate excess and made a business model out of it. He abuses his power, games the system, puts his own interests ahead of the country. It’s Trump first and everyone else last.”

.@HillaryClinton on Trump: “Here’s my question: What kind of genius loses $1 billion in a single year?” https://t.co/VLQiBPRjNG