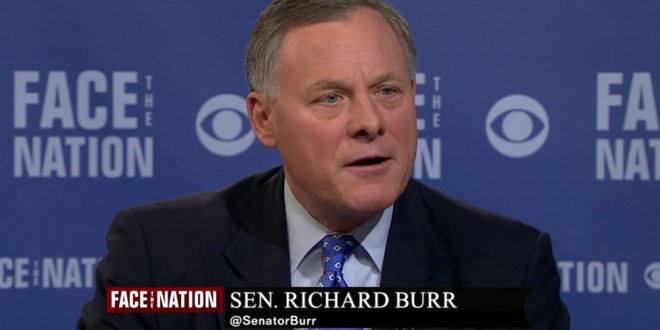 Sen. Richard Burr privately mused over the weekend that gun owners may want to put a “bullseye” on Hillary Clinton, according to audio obtained by CNN. The North Carolina Republican, locked in a tight race for reelection, quipped that as he walked into a gun shop “nothing made me feel better” than seeing a magazine about rifles “with a picture of Hillary Clinton on the front of it.”

“I was a little bit shocked at that — it didn’t have a bullseye on it,” he said Saturday to GOP volunteers, prompting laughter from the crowd in Mooresville, North Carolina. “But on the bottom right (of the magazine), it had everybody for federal office in this particular state that they should vote for. So let me assure you, there’s an army of support out there right now for our candidates.” The comments resemble similar ones made by Donald Trump in August when the GOP nominee said “Second Amendment people” could take matters into their own hands if Clinton became president.

Burr apologized for the comment in a statement to CNN issued this afternoon.

Previous Senate GOP Judiciary Chair Blasts James Comey
Next Trump: Hillary Is A Terrible Example For My Son (Unlike Pussy-Grabbing And Perving On Underage Girls)