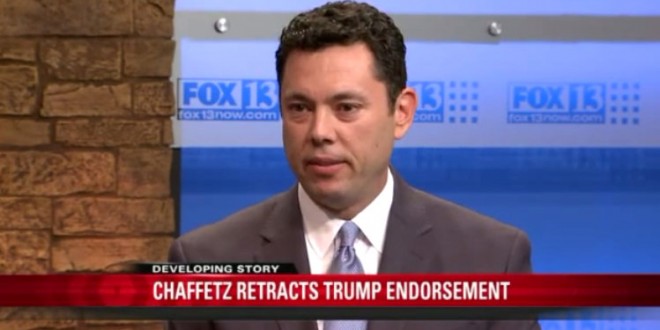 Congressman Jason Chaffetz said he is withdrawing his support for Donald Trump Friday after a video surfaced showing the Republican candidate for president making vulgar remarks in 2005 about touching and kissing women without their consent.

Chaffetz, a Republican representing Utah’s Third Congressional District, appeared on Fox 13 News at Nine Friday, saying: “I’m out. I can no longer in good conscience endorse this person for president. It is some of the most abhorrent and offensive comments that you can possibly imagine.”

Rep. Chaffetz said he and his wife have a 15-year-old daughter, and he said if he can’t look her in the eye and tell her about what Trump said he can’t endorse the man.

While Chaffetz said he isn’t sure who he will vote for, he said he won’t be voting for Hillary Clinton and added that it’s a shame Mike Pence isn’t at the top of the ticket. He also said Trump’s response to the criticism was an apology for getting caught, not an apology for his behavior.