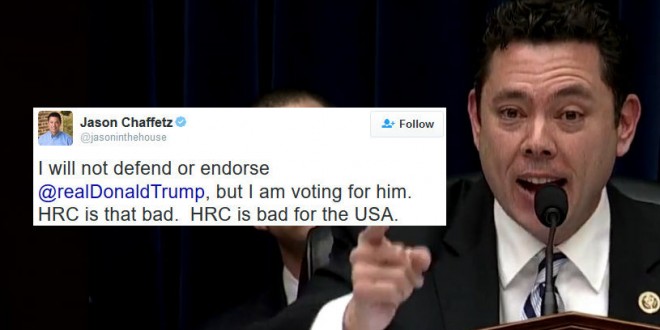 Republican congressman Jason Chaffetz, who hails from the newly-minted toss-up state of Utah, seemingly has had a change of heart: He now says he will indeed vote for Donald Trump. “I will not defend or endorse @realDonaldTrump, but I am voting for him. HRC is that bad. HRC is bad for the USA,” Chaffetz tweeted Wednesday night.

But earlier this month — after audio of Trump bragging to former “Acccess Hollywood” host Billy Bush about sexually assaulting women was leaked — Chaffetz told ABC News Radio, “I don’t plan on voting for Donald Trump … this is quite the quandary what the nation’s going to have to figure out.”

And during another interview with ABC News after the audio’s release, Chaffetz said, “I’m out, I can’t support Trump after his lewd comments.” When contacted by ABC News Wednesday night, Chaffetz declined to elaborate on his latest tweet, saying, “hopefully it speaks for itself.”

Hey @jasoninthehouse: How are you going to look your daughter in the eyes after THIS? #PlentyOfTimeToChangeYourMindAgainBeforeMidnight https://t.co/qeeLqAyjiv