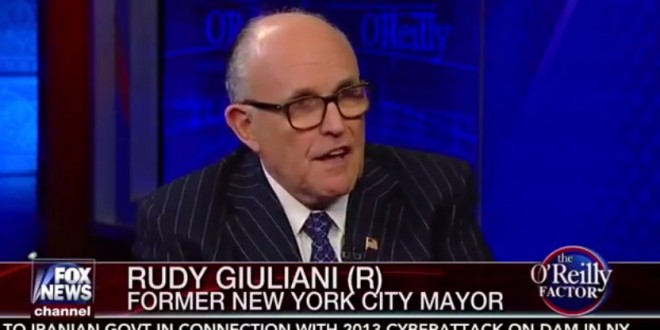 Giuliani: I See Hillary In An Orange Jumpsuit [AUDIO]

Former New York mayor and top Trump adviser Rudy Giuliani said Tuesday that when he looks at Hillary Clinton, he sees her “in an orange jumpsuit.” Giuliani was asked by host Dom Giordano on 1210 WPHT Philadelphia radio about his experience attending the Alfred E. Smith dinner last Thursday, where Clinton and Trump both gave speeches. In her speech, Clinton made a joke at Giuliani’s expense and the Trump surrogate’s displeased reaction was widely shared online. Giordano asked Giuliani if he was going to “take out a pair of handcuffs and hold them up at that point.” “Well, I was US attorney and assistant to the US attorney for too many years to laugh at Mrs. Clinton,” Giuliani said. “When I see her, I see her in an orange jumpsuit, I’m sorry, or at least a striped one. I’d have prosecuted her a year ago and probably convicted her by now.”