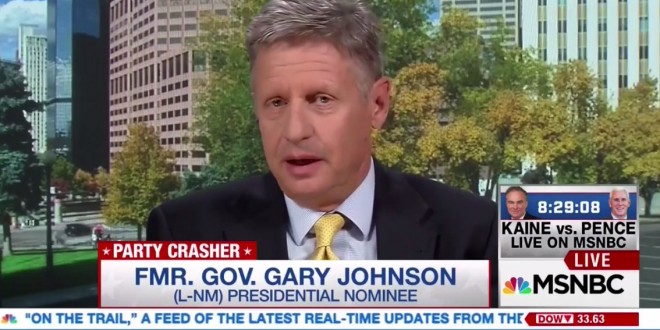 Gary Johnson: Leaders Who Know Geography Are Dangerous Because They Know Where To Start Wars

Yep. He said that. Watch the video. Business Insider reports:

Libertarian presidential candidate Gary Johnson told MSNBC’s Andrea Mitchell on Tuesday that being able to “dot the I’s and cross the T’s on foreign leaders and geographical locations” allows leaders “to put our military in harm’s way.”

Johnson was responding to questions about his latest foreign policy gaffes, including one last month when he asked “What is Aleppo?” when asked about the war in Syria, and more recently when he could not name a single world leader he admired in a conversation with Chris Matthews.

“You know, when it comes to talking about a foreign leader that you admire, I have a hard time with that one,” Johnson said. “That’s politics. That’s just who I am … maybe I think too much.”

Andrea Mitchell responded that he’s running to be commander-in-chief and that knowing how to answer questions like these is “part of the portfolio.” Johnson replied that “the fact that somebody can dot the I’s and cross the T’s on a foreign leader or geographic location then allows them to put our military in harm’s way.”