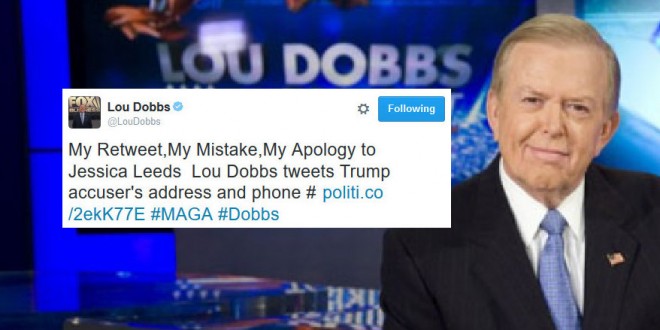 Early this afternoon Fox News host Lou Dobbs spawned a firestorm of criticism after he retweeted the home address and phone number of one of Trump’s accusers. Just now Dobbs tweeted the above apology with a #MAGA nod to Trump and a link to Politico‘s story about the controversy. At this writing Fox News has not responded to media inquiries regarding any possible repercussions for Dobbs’ actions. We’re not holding our breath.

Previous Donald Trump Junior: That #Pussygate Tape Just Proves My Father Is A Regular Person Like Everybody Else
Next Trump Says Accuser Isn’t Pretty Enough To Assault: “Take A Look At Her, Tell Me What You Think” [VIDEO]