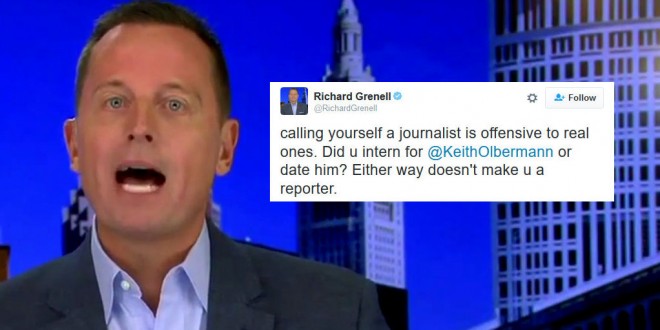 In a tweetstorm Friday, Fox News contributor Richard Grenell went after MSNBC’s Katy Tur over what he felt was her biased reporting on the recent WikiLeaks email dumps. He also suggested that Tur only got her position due to her relationship with former MSNBC host Keith Olbermann.

The former Romney spokesperson used a tweet from Tur’s highlighting the breaking story that Gloria Allred is bringing forth another Donald Trump sexual assault accuser to bring up how she was ignoring the real story of the day.

After Tur clapped back with her own tweet, Grenell then said it was “offensive” for her to call herself a journalist and brought up Olbermann. Grenell then sent a number of tweets defending his position, stating it wasn’t sexist and that he was merely calling out phony reporting and journalism.

Grenell was the spokesman for the 2012 Romney campaign for about ten minutes until American Family Association radio host Bryan Fischer went on a rampage.

Dude, you accused @KatyTurNBC of sleeping her way into her job. Yes, that's sexist. https://t.co/ApsVB1UkN9

Must be nice to have so much free time to lob misogynistic attacks against women on the Internet. @RichardGrenell needs some new hobbies. https://t.co/zEU1jSuWjE

My god what is wrong with you https://t.co/uLoBPRh6ID

Previous Apprentice Contestant Alleges Trump Sexually Assaulted Her: He Thrust His Genitals Against Me [VIDEO]
Next Trump Backer Roger Stone Says He’d Be “Happy To Cooperate” With Feds On Wikileaks Relationship