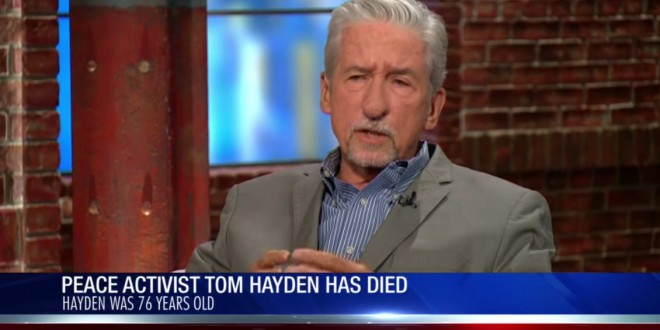 Tom Hayden, the preeminent 1960s radical who roused a generation of alienated young Americans, became a symbol of militancy by leading riotous protests at the 1968 Democratic National Convention, and added Hollywood glamour to his mystique with an activist partnership and marriage to film star Jane Fonda, died Oct. 23 in Santa Monica, Calif. He was 76.

Hayden’s wife, Barbara Williams, said he died after a long illness, according to the Associated Press. He had heart disease and was hospitalized for a stroke in 2015.

At a moment in history – June 1962 – before U.S. escalation in Vietnam, the assassination of President John F. Kennedy, the civil rights March on Washington and the awakening of the environmental and feminist movements, Hayden emerged as one of the most articulate spokesmen of youthful angst.

At 22, a year out of college in Michigan, he drafted the Port Huron Statement, an expansive Utopian manifesto that extolled “participatory democracy” as an antidote to the complacency and conformity of the Eisenhower decade.

In 1965, as a guest of the North Vietnamese, he became one of the first Americans to visit wartime Hanoi. Years later, he urged Fonda to make the trip, a public relations disaster that saddled the actress with the derisive nickname “Hanoi Jane.”

With Rennie Davis, Abbie Hoffman and other radical leaders, Hayden went on to plot the massive antiwar demonstrations that turned Chicago’s streets into a battleground for five days in August 1968.