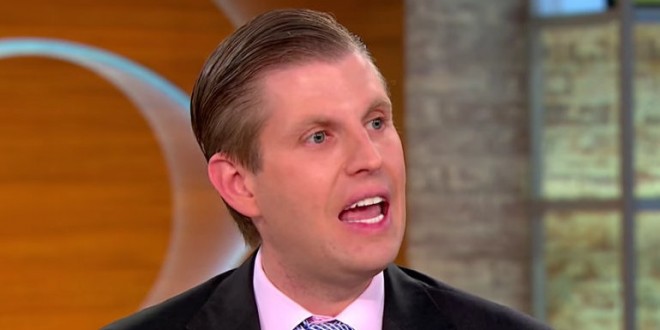 Yet another nod to the alt-right, for whom “beta male” is the second-favorite insult after “cuck.” The Colorado Gazette reports:

Eric Trump, the presidential candidate’s 32-year-old son, came to Colorado Monday to talk business and energize volunteers, but he was armed and ready to defend his father’s personal reputation.

He blamed Hillary Clinton’s campaign for releasing a 2005 “Access Hollywood” audio tape in which his father made lewd comments about kissing and groping women against their will, and getting away with because he’s a celebrity.

“I think that’s Hillary going low,” the younger Trump said in the campaign’s Denver office, after he greeted volunteers. “I think you’ve seen that for a long time. If you look at her track record with women, I think you saw that yesterday with some of the people we had sitting at the debate. It’s horrible. She’ll dig out dirt on someone from 15 years ago when someone is in entertainment.

“And, listen, my father apologized for it. He was right to apologize for it, and I’m glad he apologized for it. At the same time, if you look at her track record with women, it’s horrible. It’s absolutely horrible.” There has been no evidence that the Clinton campaign released the damaging tape. Eric Trump said he was “surprised it came out.”

“At the same time, I think it’s locker room banter,” he said, repeating his father’s description of it. “I think sometimes when guys are together they get carried away, and sometimes that’s what happens when alpha personalities are in the same presence. At the same time, I’m not saying it’s right. It’s not the person that he is.”