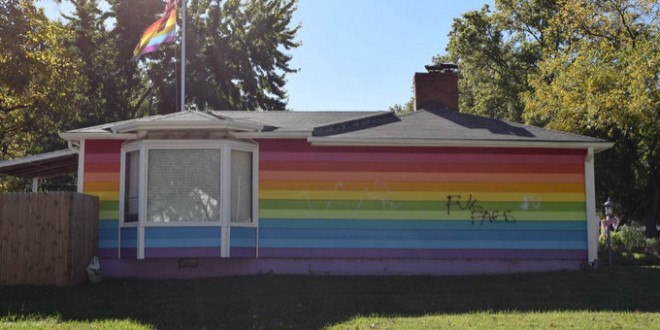 The Equality House in Topeka, Kansas, which stands directly across the street from the notoriously anti-gay Westboro Baptist Church, has been a symbol of the LGBTQ rights movement since it was first painted Pride flag colors in March of 2013. This week, however, the colorful symbol of equality was subjected to hate when spray-painted slurs and bullet holes were found on the home’s exterior.

Aaron Jackson, president of Planting Peace and founder of the Equality House, was inside at the time the house was vandalized on Sunday with spray-paint. He was awoken at around 1:12 a.m. when he heard loud noises coming from outside. He called the police, and once they had arrived, they found the anti-gay slurs on the house. A few days later, seven bullet holes were found on the same side of the home.

“The Equality House has been a target for acts of hate and intolerance that reflect the same experiences our LGBT family face every day,” Jackson said. “Planting Peace frequently receives hate mail and even death threats, but over the past three months we have seen an increase in physical acts of vandalism and violence. While it may seem shocking to some, it’s a heartbreaking reality.”