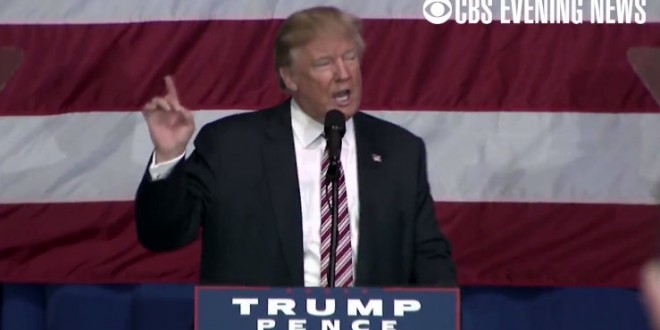 Donald Trump Doubles Down At Ohio Rally: I Will Totally Accept The Results Of The Election IF I WIN [VIDEO]

Speaking for the first time since the presidential debate last night, Donald Trump said he would “promise and pledge” to accept the results of the election — if he wins. “I would like to promise and pledge to all of my voters and supporters and to all of the people of the United States, that I will totally accept the results of this great and historic presidential election — if I win,” Trump said at his rally in Delaware, Ohio. During last night’s showdown between him and Hillary Clinton, Trump would not commit to accepting the election results. “What I’m saying is that I will tell you at the time,” Trump said last night in Las Vegas. “I’ll keep you in suspense, OK?” Trump has argued repeatedly that the election is “rigged.”

Donald Trump tells supporters at an Ohio rally that he will only accept the results of the election "If I win." pic.twitter.com/nkodyO5mG1