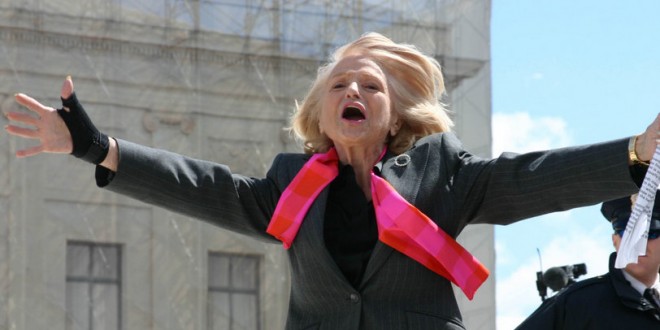 Edie Windsor, the 87-year-old LGBTQ activist whose lawsuit against the federal government helped paved the way for same-sex marriage nationwide, has gotten remarried. Windsor and Judith Kasen, 51, tied the knot on Monday at City Hall in New York, the New York Times reported on Saturday.

“I can’t think of anyone more deserving of this joy and happiness,” Marriage Equality USA Executive Director Brian Silva told NBC OUT. “We wish Edie and Judith many years of health and happiness!”

Windsor was thrust into the national spotlight after suing the federal government upon receiving a $363,000 estate-tax bill following the death of her first wife, Thea Spyer, in 2009. Her case, United States v. Windsor, was taken to the Supreme Court and eventually resulted in the decimation of the Defense of Marriage Act in 2013. Previous WaPo: Trump And Breitbart Are Normalizing Bigotry
Next Trump Denies His Own History Of Adultery, Vows That He Can Be “Nastier Than Hillary Ever Can Be”