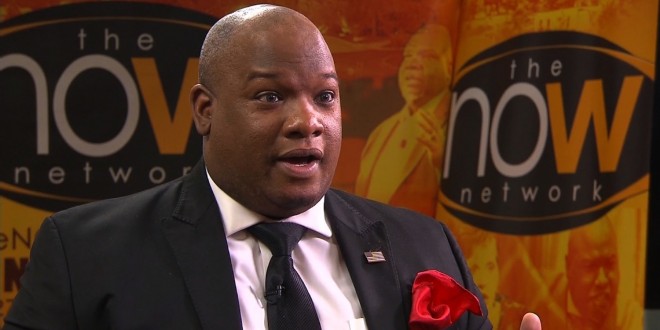 Disgraced Pastor Mark Burns: Trump Is The Winston Churchill Of Our Time Because We’re Literally At War

Pastor Mark Burns, a prominent Donald Trump surrogate, on Tuesday defended the GOP nominee’s unorthodox pitch to black voters. Burns argued that Trump recognizes “there is no such thing as the African-American community” and speaks to voters as Americans instead of “pandering.”

With just 35 days until Election Day, Hillary Clinton is crushing Trump when it comes to support among black voters. In some polls, Trump has been within a margin of error of zero.

But Burns claimed that those surveys do not accurately reflect Trump’s African-American support and accused the Democratic Party of taking advantage of black Americans for their votes. “The community has received very little in return,” Burns said. The statement somewhat echoed Trump’s own pitch to black voters: “What the hell do you have to lose?”

Burns ended the interview by comparing Trump to Winston Churchill, the celebrated British prime minister who led his country through World War II. “He’s really the Winston Churchill of today because we are literally at war,” Burns said. “We’re at war externally, against ISIS, and then we’re having a major racial division within our own country.”

If you’ve somehow forgotten about this guy and his long list of insane lies, the clip below is hilarious.