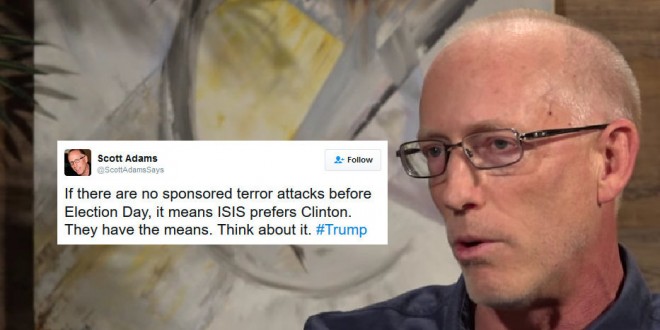 Dilbert’s Scott Adams: If There Are No Terror Attacks Before Election Day, That Proves ISIS Loves Hillary

Dilbert cartoonist Scott Adams’ vocal support for Donald Trump is getting even more bizarre. First, he pledged to join a resistance movement and help kill the GOP presidential nominee if he were elected president and behaved like Nazi dictator Adolf Hitler.

Now, he’s shared yet another strange election-related remark: Adams seems to think that the absence of terrorist attacks in Western countries before Nov. 8 must indicate that the Islamic State “prefers” Democratic nominee Hillary Clinton for president.

Unsurprisingly, many on the internet were not enthused, with multiple Twitter users criticizing Adams for his statement on Tuesday. He dismissed his critics as supporters of the former secretary of state and “Clinton bullies” in response.

Back in June, Adams said he would be assassinated if he didn’t endorse Hillary. But just a couple of years ago we were praising Adams when he ran strips that condemned India for recriminalizing homosexuality. The Trump Crazy Train ruins everything.

Previous Hillary Issues Somber “Closing Argument” Ads [VIDEO]
Next Chris Cuomo Blasts Rudy Giuliani: You’re In Trumpland And Your Facts Are All Over The Place [VIDEO]