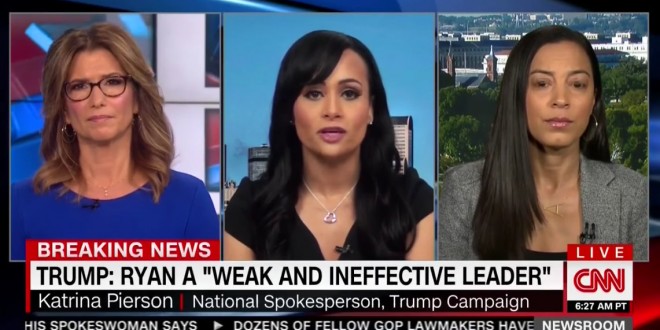 CNN host Carol Costello seemed to have had enough of Donald Trump spokeswoman Katrina Pierson, cutting an interview short on Tuesday when Costello saw the interview was “going nowhere.” Pierson was trying to pivot the conversation with Costello and Angela Rye, former executive director of the Congressional Black Caucus, to Hillary Clinton’s record on Syria and away from Trump’s bombshell tape. But Costello pointed out that Pierson’s boss had his mind focused on other topics, namely bashing his fellow Republicans.

“I can’t Katrina, because Donald Trump is not talking about that,” Costello said. Earlier in the interview that quickly became contentious, Pierson said the media hoopla over Trump’s 2005 comments, where he talked about he could get away with doing anything to women, because as a reality-TV star he was famous, reeks of hypocrisy.

“I do quite find it rich that we have Democrats and the left talking about rape culture, when they are the ones backed fully by Hollywood,” Pierson said. “This rape culture is purported by none other than the entertainment industry, none other than by hip hop music, which can you hear on local radio stations, as well as network television which actually pushes this.”