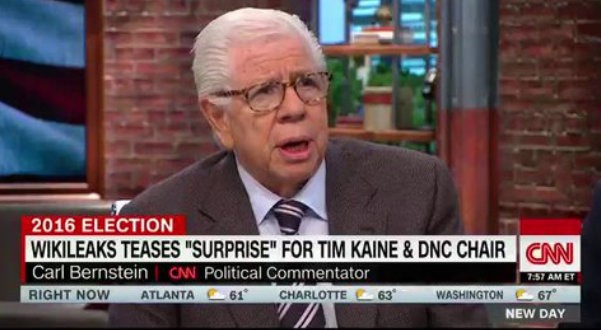 Carl Bernstein On CNN: Trump Is Setting Himself Up As The Head Of A Neo-Fascist Media Empire [VIDEO]

Carl Bernstein made an appearance on CNN this morning, and he opined that Donald Trump‘s refusal to say whether or not he’d accept the results of the election are an ominous sign of what’s to come after November 8.

A great deal of conversation still surrounds Trump’s debate remarks, as well as the psyche-out he offered while addressing criticism yesterday. When asked to discuss, Bernstein said he doubted that WikiLeaks will bring down Hillary Clinton, and he wondered whether Trump’s recent antics are all part of a plan to make sure that his political following survives should he lose the presidency.

“He is setting himself up as the head of…a real neo-fascist movement and media empire with the people from Breitbart,” Bernstein said.

.@carlbernstein on Trump: “He is setting himself up as the head of a real neo-fascist movement and media empire” https://t.co/AnjFhcA6AA