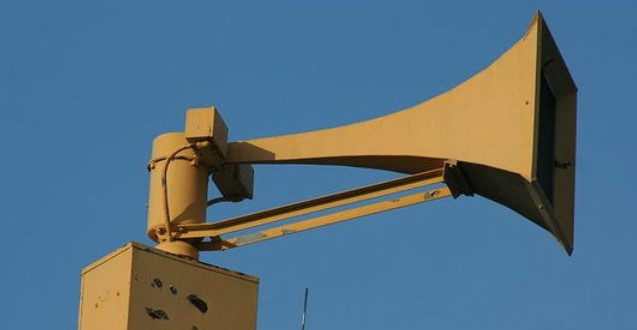 The alarm sounds much like a high-pitched air raid siren. Gothamist reports:

Long-time Brooklynites may be familiar with the siren noises that resound on Friday evenings in neighborhoods across the borough. This noise, which signals the beginning of Shabbat, gives observant Jews a heads up that it’s time to head home before sundown. The sirens are especially common in neighborhoods like South Williamsburg and Borough Park, which have large ultra-Orthodox Jewish populations.

The sirens, while extremely loud, are short-lived and usually easy enough to ignore, but a new siren on top of a Bed-Stuy synagogue is causing a bit of a stir with residents.  The siren was recently recorded hitting a decibel level of 106, more than double the legal limit for New York City.

“It leaves me with a ringing in my ears and headaches that have continued for two days,” said Aaron Graubart, who lives at 144 Spencer Street, a six-story apartment building next door to the Bais Yokov Nchemyeh D’setmer synagogue at 690 Myrtle Avenue. “I work from home and I now have to be out of the apartment on Fridays in order to avoid the sound. The siren is literally forcing me out of my home on Friday afternoons.”

The legal limit for air conditioner noise in NYC is 42 decibels. Noise from houses of worship, such as church bells, are largely exempt from these laws. There’s much more at the link.