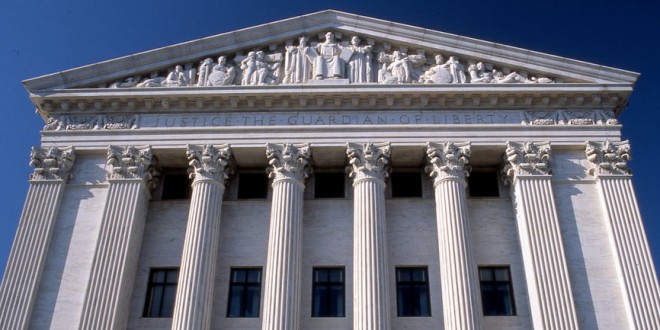 The Supreme Court agreed Friday to take up the controversial issue of transgender rights, instantly transforming what had loomed as a holding-pattern term with only eight justices into one featuring another major social policy issue.

The justices will consider a Virginia school district’s challenge to Obama administration regulations requiring that schools allow transgender students to use restrooms matching their chosen gender, rather than birth gender.

A federal appeals court ruled in April for high school student Gavin Grimm in one of several lawsuits challenging the Department of Education rule. The justices could have sidestepped the issue pending action by other appellate courts but decided to wade in now. The case is likely to be heard by April and decided by late June.

Grimm, a 17-year-old high school senior in Gloucester County, Virginia, identified as a boy several years ago and eventually sought to use the boys’ bathroom in school. He is represented by the American Civil Liberties Union, whose legal director, Steven Shapiro, said, “We want to get it resolved for his benefit as fast as we can.”

But 23 states, including North Carolina and Texas, have challenged the administration’s right to interpret its own regulations without legislative action or judicial review. And several conservative justices have argued in the past that agencies have no such power.

“The Supreme Court’s ultimate decision in this case will have a profound impact on transgender youth across the country,” said HRC Legal Director Sarah Warbelow. “While hundreds of school districts nationwide are already respecting the civil rights of their transgender students, some are unconscionably discriminating against students like Gavin. Every day that discrimination is allowed to continue, transgender students are put at even greater risk of harm. No young person should wake up in the morning fearful of bullying or discrimination during the school day ahead.”

In June, a federal court ordered the Gloucester County School Board to allow Grimm full access to the restroom that corresponds with his gender identity, consistent with a ruling from the Fourth Circuit Court of Appeals. In August, SCOTUS halted the lower court’s order, allowing the school board’s discriminatory policy to remain in place while the court awaited an application by the school board to have its full appeal heard. The Fourth Circuit ruling gave appropriate deference to the Department of Education’s interpretation of Title IX as allowing transgender students to use school restrooms consistent with their gender identity.

Allowing transgender people to access facilities consistent with their gender identity — something compelled for years by laws in 18 states as well as adopted by hundreds of cities and school districts around the country — has not resulted in problems. On the other hand, forcing transgender students to use sex-segregated facilities contrary to their identity can impose real harm on transgender students, further compounding the discrimination and marginalization they already face.