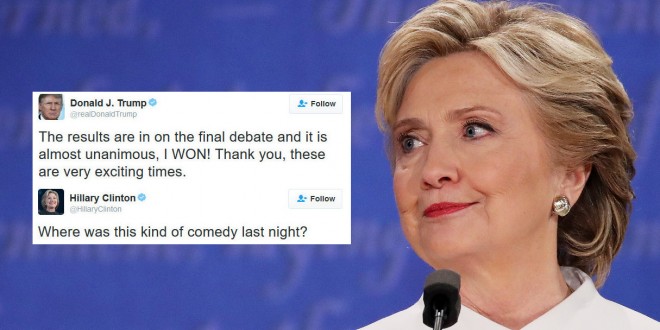 Hillary Clinton’s campaign took a shot at Donald Trump in a tweet Friday afternoon. “Where was this kind of comedy last night?” Clinton’s account tweeted at Trump after the Republican nominee claimed that he had almost unanimously “won” the third and final presidential debate on Wednesday evening.

The Clinton campaign was referring to Trump’s speech Thursday night at the Alfred E. Smith Memorial Foundation dinner, a charity event in Manhattan where the two major-party presidential candidates traditionally roast each other in the lead-up to Election Day. A CNN/ORC instant poll showed that Clinton won the final presidential debate by a significant margin.

Previous Trump In 2007: Hot Women Are My Alcoholism, I Like To Hire Teenagers If They’re Hot Enough [VIDEO]
Next Trump Tells The Truth: “I Like To Deny Things”