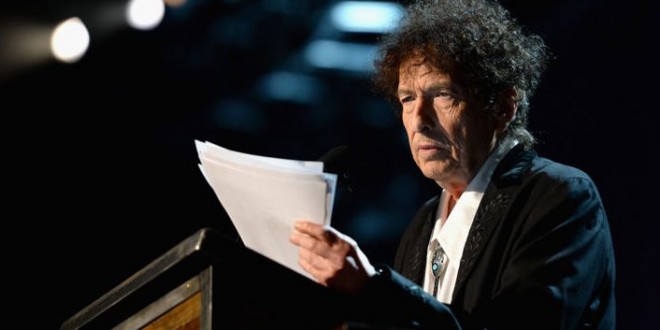 Bob Dylan, regarded as the voice of a generation for his influential songs from the 1960s onwards, has won the Nobel Prize for Literature in a surprise decision that made him the only singer-songwriter to win the award.

The 75-year-old Dylan – who won the prize for “having created new poetic expressions within the great American song tradition” – now finds himself in the company of Winston Churchill, Thomas Mann and Rudyard Kipling as Nobel laureates.

The announcement was met with gasps in Stockholm’s stately Royal Academy hall, followed – unusually – by some laughter. Dylan’s songs, such as “Blowin’ in the Wind”, “The Times They Are a-Changin'”, “Subterranean Homesick Blues” and “Like a Rolling Stone” captured a spirit of rebellion, dissent and independence.

More than 50 years on, Dylan is still writing songs and is often on tour, performing his dense poetic lyrics, sung in a sometimes rasping voice that has been ridiculed by detractors.