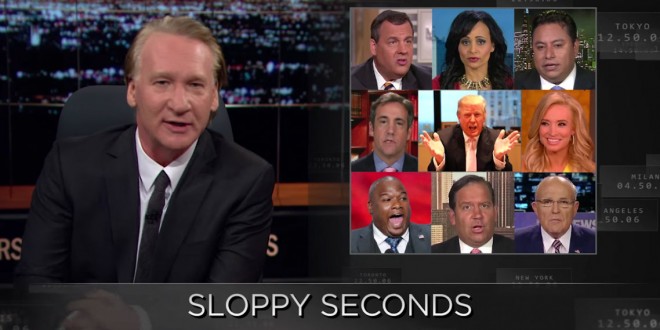 “If you think you hate the establishment now,” Bill Maher cautioned viewers Friday night, “Wait until [Donald Trump] wins and the Trump surrogates—that basket of inexplicables he sends out every day to speak for him—become the establishment.”

Maher then launched into an epic evisceration of people like Omarosa Manigault, Chris Christie, and Rudy Giuliani. Why would Trump surround himself with these idiots? Well, as Trump once said, “Always be around unsuccessful people because everybody will respect you.”

It seems that Trump takes his own advice. “That does explain Rudy Giuliani,” Maher joked. It also explains the pastor who, when interviewed by CNN, declared the conversation “off the record” only after the reporter questioned him about his bogus claims that he graduated college.

And then there’s Marco “taco truck on every corner” Gutierrez. Or Katrina “Obama started the war with Afghanistan” Pierson. And let’s not forget Trump’s lawyer, Michael “Says who?” Cohen.

Previous Trump Denies His Own History Of Adultery, Vows That He Can Be “Nastier Than Hillary Ever Can Be”
Next Curt Schilling Vows To Unseat Sen. Elizabeth Warren